Still growing! Hard to believe this pregnancy is almost over. Less than 3 weeks to go. Nineteen days. Let the panic begin.

I’m sleepy beyond control lately. But when I want to sleep, it won’t happen. Then there is the hips. The loosening. The spreading. The pain anytime I get up. The inability to run, or even walk fast for that matter. It isn’t all bad though. There is the dancing bug in my belly who is clearly running out of space. There’s a ridiculous party that happens each and every night. There is the getting to buy some new clothes 🙂 I realized this past weekend that the pants I wore toward the end of my pregnancy with Ben are essentially see through they have worn so thin. I just wish ptb would have told me that before I ran errands in the morning. With striped underwear on. Thanks for letting me know before I left the house.

I tested positive for Group B Strep. All this really means is I’ll be getting an anti-biotic via my IV at delivery. Hard to believe this will be my first antibiotic in probably about 7 years. It’s a little sad to me that the Bean has made it nearly 22 months med free and I will be starting the Bug on one the moment they enter the world. When I told ptb after my appointment that I tested positive he responded with “Oh no that stinks! So that’s why you have been sick lately?”…No dear…my sore throat is not caused by Group B. With how bad my pregnancy brain has been, it really helps to have my Dr. Scientist Husband ask such a silly question. 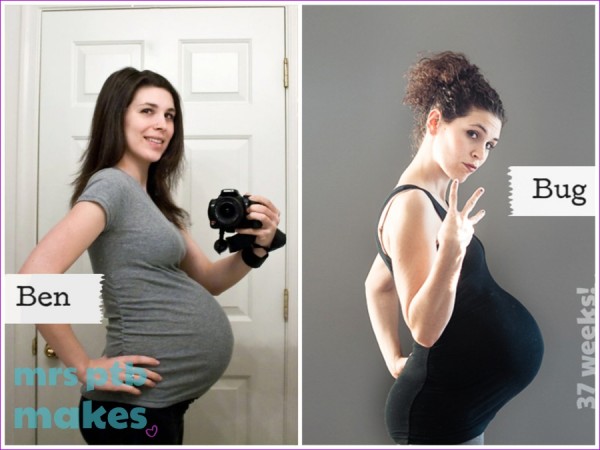 Anyone have any new guesses on sex or arrival?